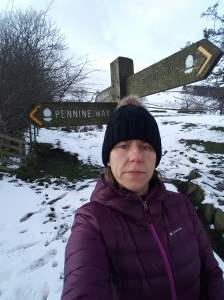 Out of Edale the wind was head on, I lent into to it but for a few seconds was unable to move. The hail, carried on the wind, was painful on my eyes, I shut my eyes, put my head down and pushed on into the dark. Sunrise pushed the dark away but the wind got stronger as I made my way along towards Kinder Downfall. 100 mph gusts lifted me off my feet and dumped me onto a slab of rock over to the right of the path. I swore loudly, picked myself up and carried on, I was loving it.

This was my experience of the Montane Spine Challenger in 2015, it ended prematurely on day 2 when I eased my battered and bruised body into the car after about 60 miles and asked Lindley to ‘please take me home.’

Roll forwards to January 2017 and a return to Edale for attempt number 2. 2016 had involved monthly visits to various sections of the Pennine way in order to train on the actual terrain, get to know the route and practice with kit. I am using the same Ultimate Direction 20l pack as before but had to buy a new sleeping bag to meet the 0° comfort level now specified in the mandatory kit. Budget restrictions meant the the ultra small down bags were out of the question so I had to go for the Vango Ultralite 900. A waterproof compression bag allowed me to attach this to the outside of the pack. Inside the pack I put my Alpkit Hunka bivi, my stove, food and additional clothing. This year I also bought an OMM front pouch into which I put my maps, headtorch, GPS, compass and loads more food. Last time I wore Innov8 gortex boots but this time I have decided to go for something more substantial so bought a pair of Mammut Nova Base mid gortex boots. I’ve been out in them a few times and have found them very comfortable and also flexible enough to run in too.

The day before the race start we drove the cold and snowy roads into Edale, registered, had my kit checked and attended the race briefing. That done there was plenty of time to eat, chat with other runners and supporters, eat and eat some more.  For some reason I had a real case of the munchies- maybe it was the cold weather. Saturday morning arrived and by 7am the race competitors were gathering in Edale village hall. Trackers were fitted whilst we nervously eyed up the size of each others packs. I felt quite relaxed at this point, all the preparation had been done, now it was just a case of 105 miles to do! Ten, nine, eight…the count down began, at 8am on the dot we were off. I ran the first few metres and then settled to a brisk walk as we made our way out of Edale. Across the fields we followed in each others footsteps as the leaders broke the trail through fresh snow. Then came the climb up Jacobs Ladder negotiating each step carefully, avoiding slippery icy rocks. At times finding the path was difficult due to both the covering of snow and the fog that had come down, reducing visibility. Eventually we crossed Kinder Downfall and then battled on towards Mill Hill through a blizzard. Amazingly a short time after reaching Mill Hill the fog lifted and we crossed the snowy plateau to Snake Pass bathed in warm sunshine. Bleaklow also proved to be a navigational challenge, the secret was to get a feel for what lay underneath the snow and notice as soon as possible when you were off the path/flagstones.  By combining this feel with following my GPS I was able to keep on track and head fairly quickly down to Torside reservoir.  Unfortunately I got a bit too complacent at this point, slipped on the muddy grass and covered my backside in wet mud!

After Torside I continued to make good progress, aiming to get to Wessenden before darkness. I managed this in plenty of time and was down past the reservoir before needing to put my headtorch on. I was really pleased by this as I knew this made me a hour faster at this point than on my previous attempt.

At Standedge was one of many small and very welcome checkpoints manned by local mountain rescue teams. I drank a coffee and ate a few biscuits before leaving along with a couple of other competitors, Eliot and John.  Together we made our way over the moors, crossed the M62 and then headed for Stoodly Pike.

The Pike always seems to take forever to get to but eventually we made it and then turned right, to pick up the track down to the Hebden Bridge road crossing.  After crossing the road you encounter what seems like an unfeasibly steep cobbled path. It’s a case of one foot in front on the other until you reach the top. It was during this section of the route that I conveniently forgot about the drop down to the river and back up again that had to be negotiated before we could finally head down the steep ravine path to the checkpoint at Hebden Hey scout camp.

Arriving into the checkpoint at 1am I knew I didn’t want to hang around too much. I read a text from Lindley ‘get a couple of hours sleep, then move on’. I quickly changed into clean dry clothes, ate a meal and then got my head down. By 3.30am I was back out on the trail.

Overnight the weather had changed and it had started to rain, not too heavy but enough to need full waterproofs on. The main difficulty now was the sheet ice on the tracks and flagstones, in many places covered by water. A game of ice Russian roulette ensued as I tried to guess which bit would be slippery.

By the time I reached Top Withens, Eliot and John had caught up with me and we ducked into the bothy to get some shelter and a bite to eat. Daylight was beginning to make its presence felt, John hopefully mentioned sunshine but that wasn’t to be. We set off again down the icy track, crash…John went down with a thump onto the ice. We held our collective breaths to see if anything was broken, after a few anxious minutes all seemed well and we continued onwards.

Ickornshaw Moor has got to be one of the wettest sections of the Pennine Way. On my own again at this point I splashed and sloshed my way along tracks that were becoming more like rivers as the snow melted and the rain continued. A couple of deep river crossings later and my feet were now thoroughly soaked.

This soaking was the beginning of the end for my feet and ultimately my race. My Nike Drymax socks had, up to now, been brilliant but the wet was just too much even for them. As the skin on my feet became pruny the fabric of the socks turned abrasive and painful on my skin. I continued on the best I could across the soggy, muddy fields through Thornton in Craven and on to Gargrave.

I knew what I needed to do – remove boots and socks, powder feet, allow to dry for a short while then put fresh socks on. Only problem was that I had no powder with me and I needed different socks.

By the time I got to Gargrave I knew I couldn’t continue. I phoned Lindley and pulled from the race and then phoned my daughter to come and collect me.

So for me it was race over and back to watching the online version as the trackers of other competitors continued north. I was pleased to see that Eliot, John and others that I knew made it to the finish line.

Will I be back? Most definitely, I have already  planned my training strategy for the next 12 months so watch this space… !

Subscribe to my email list. Get notifications of new blog posts and other great news from me.